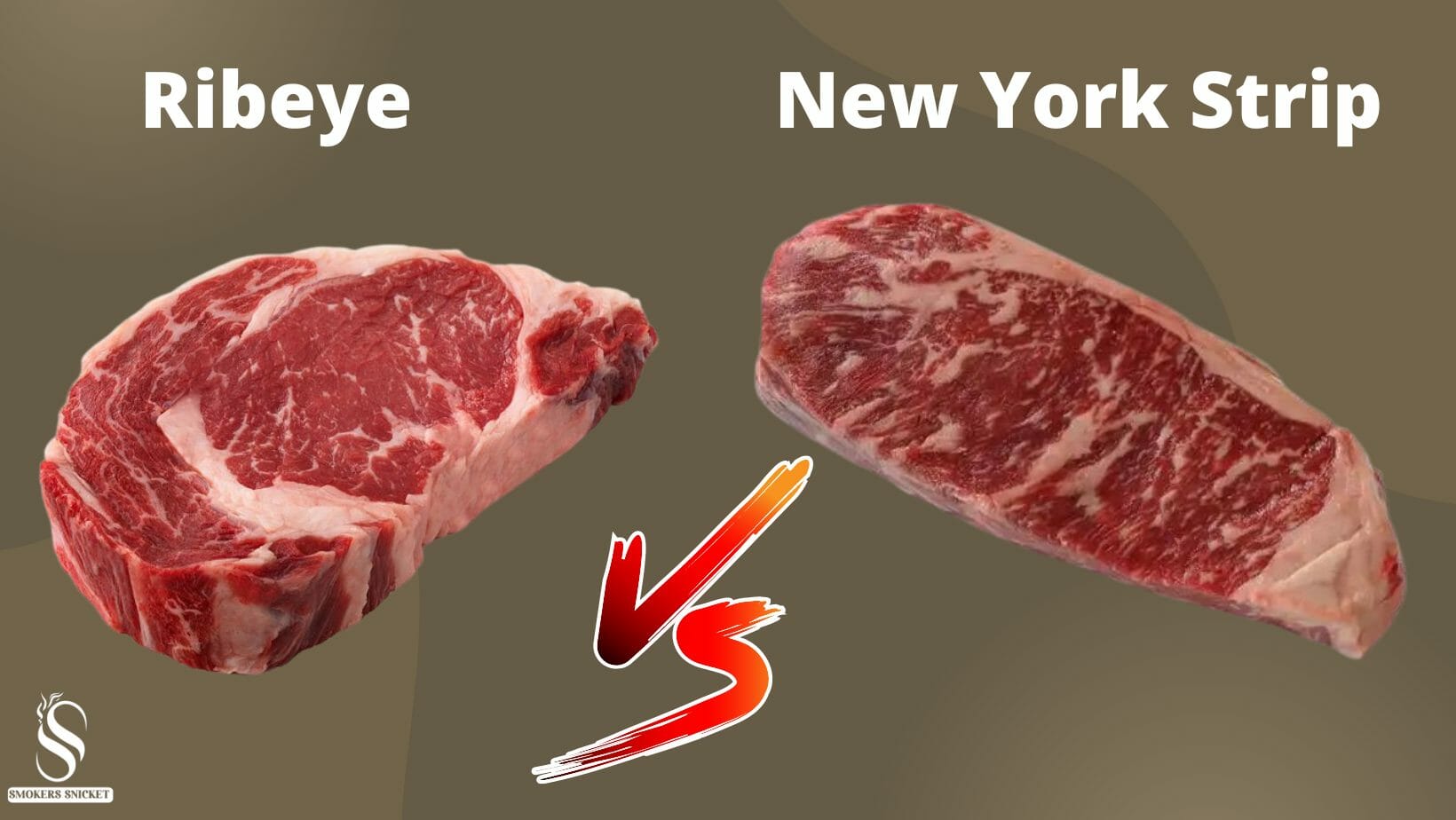 There always comes a time where we find ourselves with never-ending questioning thoughts about what we really want. But not anymore! With my presence, I shall take all your worry thoughts about the steaks away, and make you enlightened about each and all.

In this article, I will be solely focusing on two most renowned cuts of steak, the Ribeye and the New York Strip! So, let’s lay these two side by side and spot all the clues that makes each of them truly appreciable.

I have also written a few more articles about different beef cuts as well. So if you are feeling a little too generous to buy yourself more than just one steak, go ahead and give these following articles a read!

What is a Ribeye?

Also known as the beauty steak, Ribeye originally gets its name from the place it is found at. This premium cut is obtained from the neck part of a cow – the top of the ribs. It is best known for its succulent steaks, that just simply melt in the mouth when devoured.

The secret to its succulence? Intramuscular fat (also known as marbling). Ribeye is generously marbled, giving your steak not just the burst of flavors, but keeping it super tender as well!

What is a NY Strip?

Obtained from the top section of a sirloin, New York Strip is specifically found at the rear part of a cow, that is behind the ribs and below the back bone. NY strip is one of those steaks that can be a little tricky to cook, one misstep and you will lose all the good things that come with this steak.

It is comparatively less tender than the ribeye due to the presence of less intramuscular fat. But if you ask me, as an optimistic person, I would see it as a sign to start living a healthy life.

Now that you have been given a brief overview about these two premium cuts, let’s move on to the more Important things and figure out how Ribeye and NY Strip differ from each other and what really makes these steak cuts better!

Taking a standard size of 8 oz of raw Ribeye and New York Strip Steak, Ribeye is found guilty of 544 kcal while NY Strip comes with a calorie count of 450 kcal.

You don’t have to be a genius to guess the winner of this round, New York Strip takes the point for having less calories AND providing with almost equally succulent steak!

So if you really are trying to find your way back to living a healthy lifestyle, New York Strip should be on your plate. But eating a Ribeye steak occasionally could count as a cheat day, right?

I have said this before and I will say it again, the price of steak cuts are determined by many factors, such as the weight and quality of the meat, amount of fat and of course the standard rate in every market!

But if we put all these factors aside and think about it like an open-minded person, then there is no denying in the fact that NY Strip comes a little cheaper than Ribeye.

When equal weight of Ribeye and New York Strip are compared, Ribeye comes with more fat than NY Strip, or you could say that NY Strip comes with more lean meat than Ribeye. Surely, we feed on the lean meat but that doesn’t mean we completely neglect the fat in it. Fat is crucial to make the meat tender and juicy, so too much fat or too less fat can ruin your steak.

Here, the NY strip wins the first round.

Both steak cuts are tender, however, their degree of tenderness differs noticeably. A bite of ribeye steak almost takes you to the heaven. When grilled properly, Ribeye comes out tremendously tender. The secret? Marbling. The marbling of fat on Ribeye not only makes it super tender but gives it the ideal taste as well.

NY Strip, on the other hand, has no chance when it comes to Ribeye steak. Sure, the NY strip is tender but a bite of it comes out a little chewy. This chewiness is due to the lack of marbling in it. But we, homosapiens, have come up with a solution for it! (Aren’t we all just amazing?)

New York Strip, when cut with the thickness of 1 to 1 ½ inch and grilled under super observing eye, comes out so tender that you could mistake it for Ribeye!

So, if we really have to compare these two then I’d definitely go for Ribeye. I mean who wouldn’t love that tender juicy steak? This guy is popular and lovable!

It’s a shame to compare such premium cuts together because I personally think they both are the best. But if I was held at a gunpoint and asked this question, I would undoubtedly go for the Ribeye Steak.

What really makes ribeye so flavorful? Well, the extra marbling and sometimes the presence of bone in the ribeye, gives it a upper hand when compared to NY Strip. But that doesn’t mean NY Strip steak is deprived of fat, it just doesn’t have enough fat and marbling to meet the standards ribeye has set!

This one doesn’t really count as a difference, rather it is a similarity between these two beef cuts because Ribeye and NY Strip are of same shape and size. However, at first glance they might look just the same, but Ribeye usually comes with a bone inside while NY Strip generally lacks one.

Truth be told, Ribeye steak is genuinely better than the New York Strip – sorry, NY Strip lovers I did not come with the intention to break your heart. When I took the bite of each of these steaks, my taste buds could easily feel the difference between the two of them.

With the bite of a Ribeye steak, I truly found it melt-in-the-mouth tender and the strong beefy flavor really made me hum in approval. New York Strip, on the other hand, gave a little task to my jaws. It was less tender and more chewy, but equally delicious.

So, I have come to the conclusion that Ribeye rightfully deserves all the praise and hype it has been receiving. What’s there not to like? It literally comes with a package of everything that could make a steak lover happy and satisfied.

If you are running out of time and still want to know the differences, then worry not my fellas! I have poured all the information in this article in a very concise table. So, go on and grab the steak knowledge!

With all that being said, you are not strictly bound to try what we consider better! So, give these two steak cuts a try, and let your taste buds decide which one it prefers, and of course let us know if our guide truly helped you out in picking up the right steak.

If you still find yourself with a question itching in your brain, lay the question here so we can treat it with just the right amount of salt, pepper and of course a little grilling here and there as well!