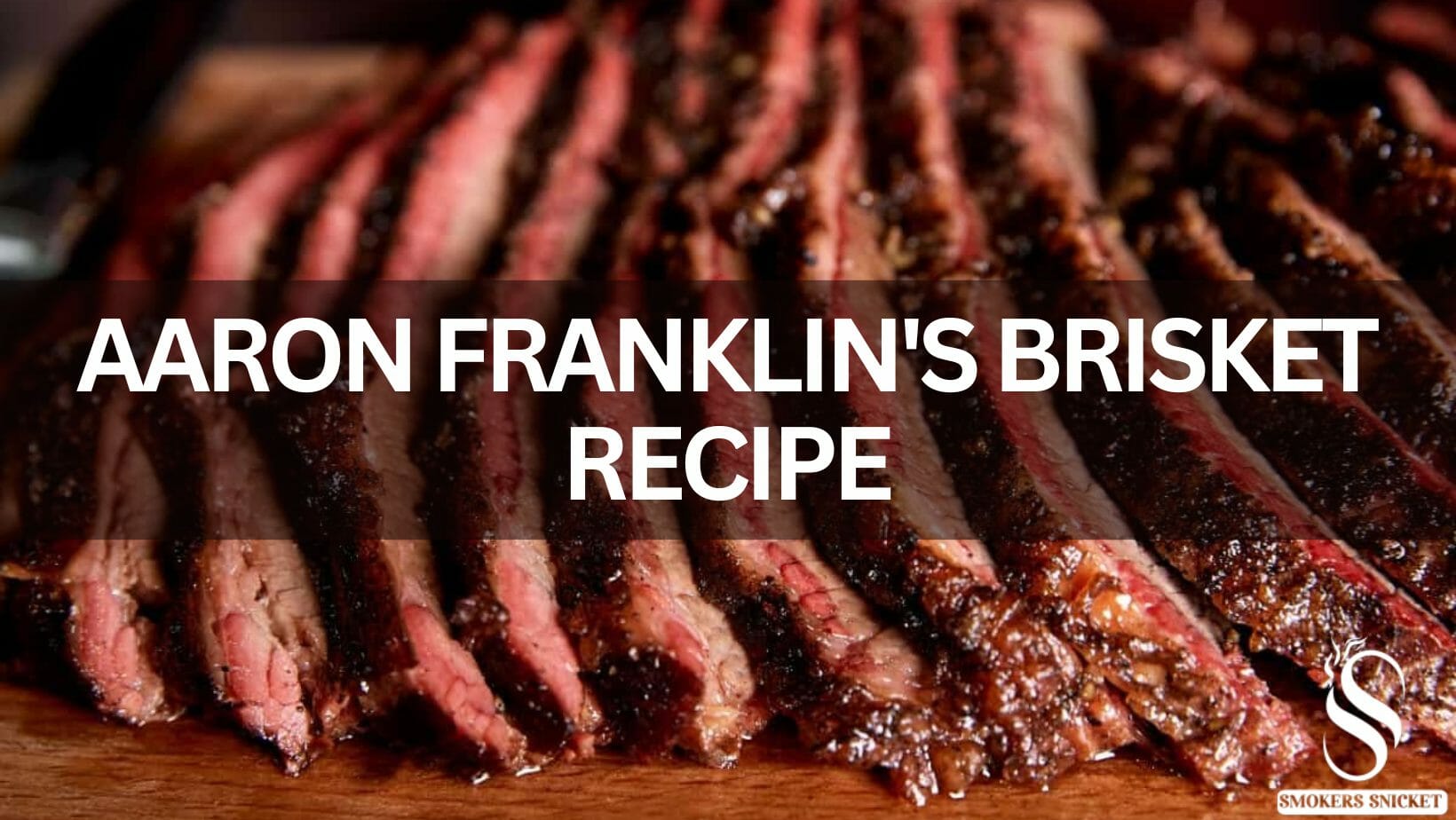 When it comes to beef, brisket is a man’s best friend – especially those in the BBQ squad. And, to have a renowned Texas style Franklin brisket right in front of you? It would really be a cherry on top. Aaron Franklin’s Brisket Recipe is the only brisket recipe you’ll ever need.

Franklin is a generous man and has nothing to hide when it comes to spilling all the BBQ tips and tricks. And so, in today’s article I will be delivering you a franklin’s BBQ brisket recipe! So, if you have a brisket lying around in your freezer, consider yourself lucky and get franklin on it!

What Is A Franklin Brisket?

When an ordinary brisket cut meets the franklin method of smoking, you get an irresistible franklin brisket.

Before we move on to the Franklin brisket recipe, let’s get to know few things about the beef cut itself. Brisket is a tough cut found at the front of the cow. Since brisket is a large cut, it is divided into two main cuts – point cut and flat cut. 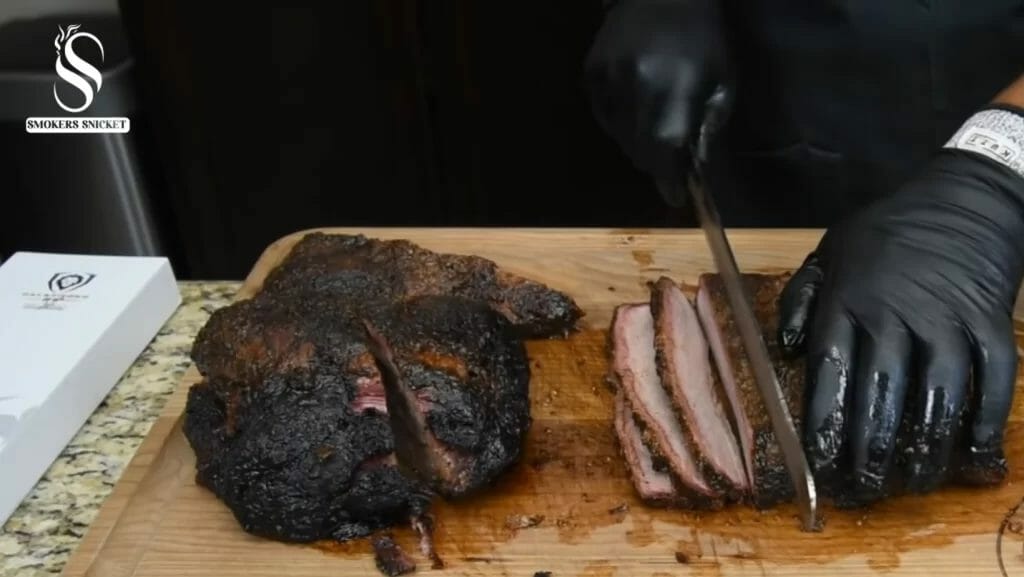 The point cut is rich in fat which makes it super flavorful and gives it a buttery texture. The only drawback is that it comes with less meat. The flat cut, on the other hand, comes with more meat and less fat. It isn’t as irresistible as the point cut but with things done right, this cut can be as good as the sirloin!

How To Smoke A Franklin Brisket

Brisket is surely rich in intramuscular fat. But there are some inedible fat that accompany the brisket and needs to be removed. The silver skin on brisket is useless, so trim off this fat completely.

Moving on to the other side, the brisket here will be completely covered by a layer of fat called the fat cap. This fat cap may not be useless, but it definitely needs to be trimmed to at least ¼ inch.

It’s important to trim the fat cap as too much fat can make the beef greasy.

Many people wrack their brains and come up with a difficult combination of seasonings, but Franklin expresses that he likes to keep the seasoning super simple.

After you have rubbed the seasoning well onto the brisket, let it stay there on the cutting board for an hour. It’s not me saying it, this is Franklin’s opinion. He believes beef should be kept outside after seasoning. But do keep in mind this rule only applies to beef cuts – chicken or other cuts should be kept in the fridge after seasoning it.

Preheat the smoker to 250° F, and add your favorite choice of woods in the chamber. Since the brisket naturally comes with robust flavor, I opt for the woods that burn hotter and longer – hickory and oak.

Add the brisket in the smoker with the fat side facing upwards, and make sure the point cut is facing the fire chamber while the flat cut is towards the chimney. The point cut comes with tremendous marbling, so it only makes sense to make it face the fire side. Also, add a water pan in the smoking chamber to keep the brisket from burning.

Smoke the brisket until the internal temperature reaches 185° F – this takes about six hours. This is where the first round of smoking comes to an end.

Note: Whenever you open the lid and notice that the bark on the brisket looks dry, spritz the beef cut with liquid of your choice – it could be water, apple juice or even vinegar!

When To Wrap Franklin Brisket

Like any other tough meat, brisket is wrapped at the second round of smoking. The purpose of wrapping the meat is to retain the moisture and heat, so the intramuscular fat can melt and blend with the meat to make it flavorful.

After the brisket is wrapped in a butcher paper, reinsert it back in the smoker for 4 to 5 hours or until the internal temperature reaches 203° F.

Franklin says there’s something about 203° F that gives the brisket a perfect balance of tenderness and chewiness. Although the internal temperature range is 200° F – 210° F, I’d still listen to him because he’s a Pied Piper and I’m just a kid mesmerized by his magical style.

Smoking brisket is not just a game of patience, it also requires your constant attention to keep an eye on the heat. The most common mistake done by every person is that they let the curiosity take hold of them and keep opening the lid. This may look harmless, but the drastic drop of temperature gives brisket a very hard time to cook up.

It’s better to get a meat probe and insert it in the center and thickest part of the brisket. This way you can keep track of the internal temperature without having to open the lid and poking it with a thermometer.

Resting And Serving The Franklin Brisket

Once out of the smoker (again), let the wrapped brisket rest for an hour or until it gets cool enough to be touched without getting your fingertips burned.

Take the beauty out of the paper and get your sharp knife ready! Its slicing time. Always cut both the flat and point cut against the grain to keep the beef more tenderer and less chewy.

Now that my online and imaginary brisket is ready, it is time to serve it! Aaron likes to serve brisket without any sauces. He says the brisket itself is delish, so what else do you need with it? But then again it always comes down to personal preference, so make your brisket saucy or serve it as sandwiches and burgers!

Smoked brisket should be tender AND intact, you don’t want it to be so tender that it starts falling apart before it even reaches your mouth! Thankfully, Aaron Franklin has let us know about this ‘Pull Test’ and made our lives comparatively much easier.

Now that you have an accurate Franklin Brisket recipe right beside you, cook up this Texas style brisket at your house and surprise your pals with the power you hold for turning this mighty brisket into a delectable chunk! 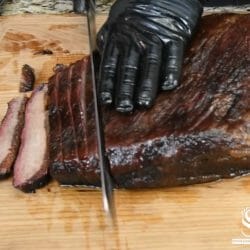