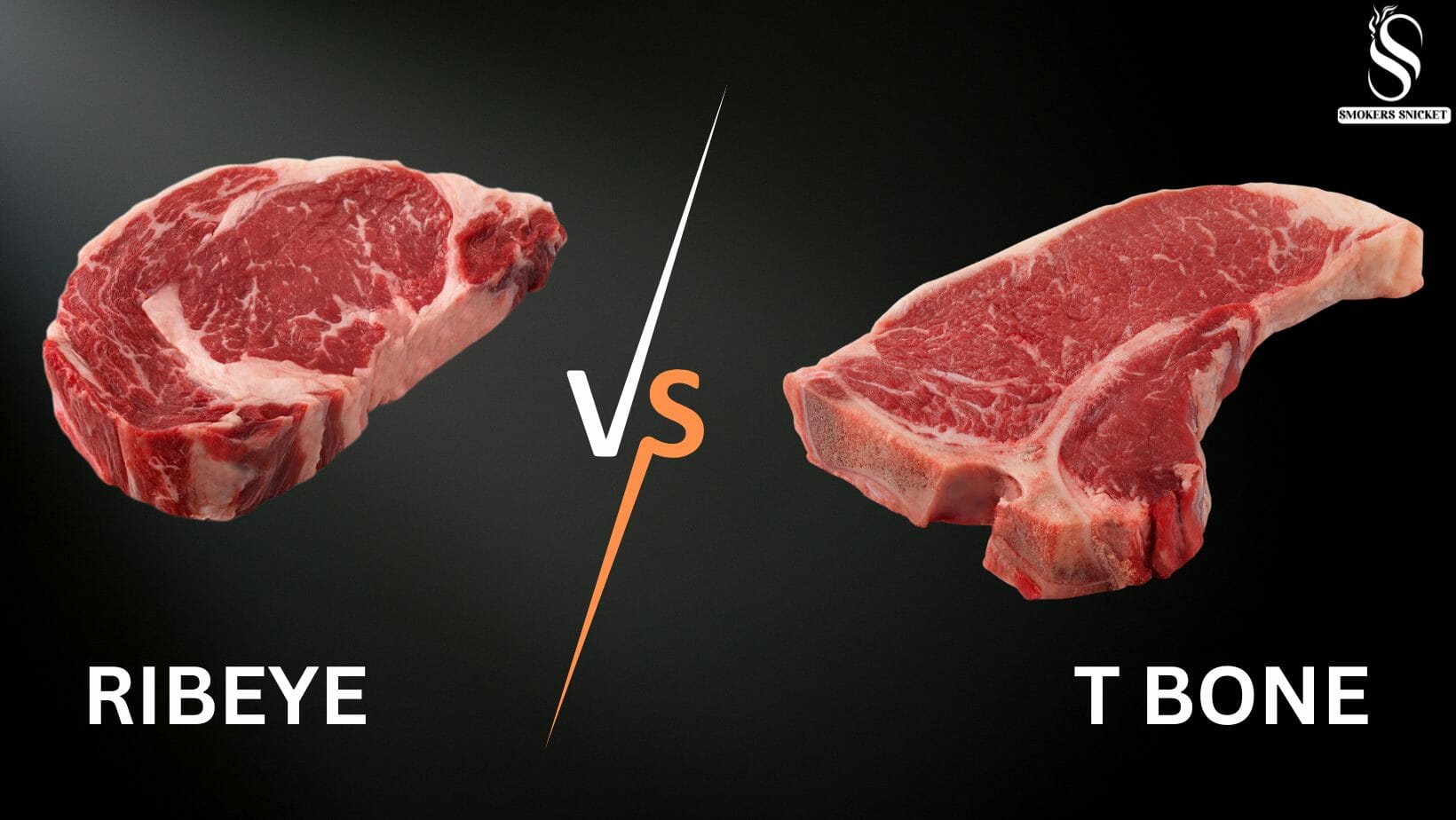 When it comes to steak, two cuts often come to mind: the ribeye and the T-bone. Both are known for their tenderness and flavor, but what sets them apart? In this article, we will dive into the ultimate steak debate of ribeye vs T-bone.

From the source of the cut to the flavor profile, we will explore the key differences between these two popular steaks. Whether you’re a seasoned steak lover or new to the game, this guide will help you make an informed decision on which cut to choose for your next dinner. So, fire up the grill and let’s get ready to settle the ultimate steak debate once and for all.

Understanding the Source and Flavor Profile of Ribeye Steak

While ribeye steak originate from the cut’s original location along the top rib cage of the cow, closer to the head and neck. The ribeye typically has a lot of marbling and is more tender due to the lack of movement and fatty nature of the meat in this region of the cow. The drawback is that some people might find a ribeye to be a little overly fatty.

The T-bone steak and ribeye are premium cuts of meat with smooth, soft textures that are flavorful and will keep you going back for more. When cooked properly, these steaks are juicy and tasty, but there are a few distinctions between them that you might want to consider when choosing the best steak for you.

However, if all you want is a good-quality steak, either of these steaks will do, these differences do not much matter!

The T bone and ribeye differ mostly in the bone and fat composition. The T bone has a “T” shaped bone with two different textures i.e. strip and tenderloin, while the ribeye can be found in boneless or bone-in varieties and has oval shape that is comparatively thicker than T bone. Due to their substantial fat content, ribeye steaks have a distinctive “meaty” flavor.

It is advised to cook T-bone over medium heat because it is thinner and more likely to dry out. But as ribeye steak is fattier and thicker, it is one of the simplest steaks to cook. T-bones typically have a thickness of less than 1.5 inches (ranging from 0.5 to 1.5), while ribeye typically have a thickness of 1.5 to 2 inches. It’s an interesting fact that a boneless ribeye is simpler to cut than a T-bone.

T-bone steaks typically more costly than ribeye steaks. Check the grade of beef and level of marbling carefully for steak purchases that are affordable. The price of the T-bone reflects the fact that you are actually purchasing two steaks when you order it.

While an average ribeye is more thicker cut costs more per mouthful than other cuts of beef. Ribeye steaks can cost between $12 and $16 per pound, but T bones can cost between $14 and $20 per pound. T-bone steaks are more expensive since they are typically reserved for special events.

The ribeye contains more fat and a rich meatier flavour. Because there is fat in every part of the ribeye steak, the flavour profiles are very strong. Contrarily, the T-bone has strip with more rich beefy flavor as well as incredibly tender and mild-tasting filet.

It can be challenging to decide between ribeye and T-bone. For dinner with family or friends, you want to prepare the finest cuts, but you also want everyone to enjoy the finest steak money can buy.

There is no obvious choice for both the cuts. Everyone has its own opinion for taste and flavor when comparing the T-bone vs. ribeye. Both cuts are excellent and merit a try. If you want two cuts of steak with distinct flavours, go for the T-bone (A very tender portion of tenderloin fillet and a beefy flavour new york strip). But if you want a steak with greater flavour and more fat, go for the ribeye.

Which is better Ribeye or T bone?

Both the cuts are worth trying and outstanding. It depends upon you what you prefer flavour or tenderness. It’s a terrific idea to combine two distinct steak cuts into a T-bone. You can experience the mild flavour of a very tender fillet (the tenderloin piece) and the beefy flavour of the new york strip at the same time. If you want a steak with greater flavour and more fat, go for the ribeye. Which steak cuts are the best?

The most flavorful cut of meat, the rib eye is a cut from the rib area that often has very deep marbling. The rib eye is a fantastic cut for grilling and slow roasting due to the deep marbling. Due to their texture and quality, the “ribeye, fillet mignon, and T bone” steaks are typically included as the top three steaks in a guide to steak cuts.

Are the T bone steaks the best?

T-bone steaks are typically regarded as one of the top quality steaks due to its size and the fact that they comprise flesh from two of the most desired cuts of beef (the short loin and the tenderloin), and pricing are more accordingly.

Which is more tender ribeye or T bone?

Is ribeye part of t bone?

No, ribeye is not part of T bone. The ribeye and T bone are the different cuts from the different parts of the cow. Both are excellent, but they are significantly different from one another.