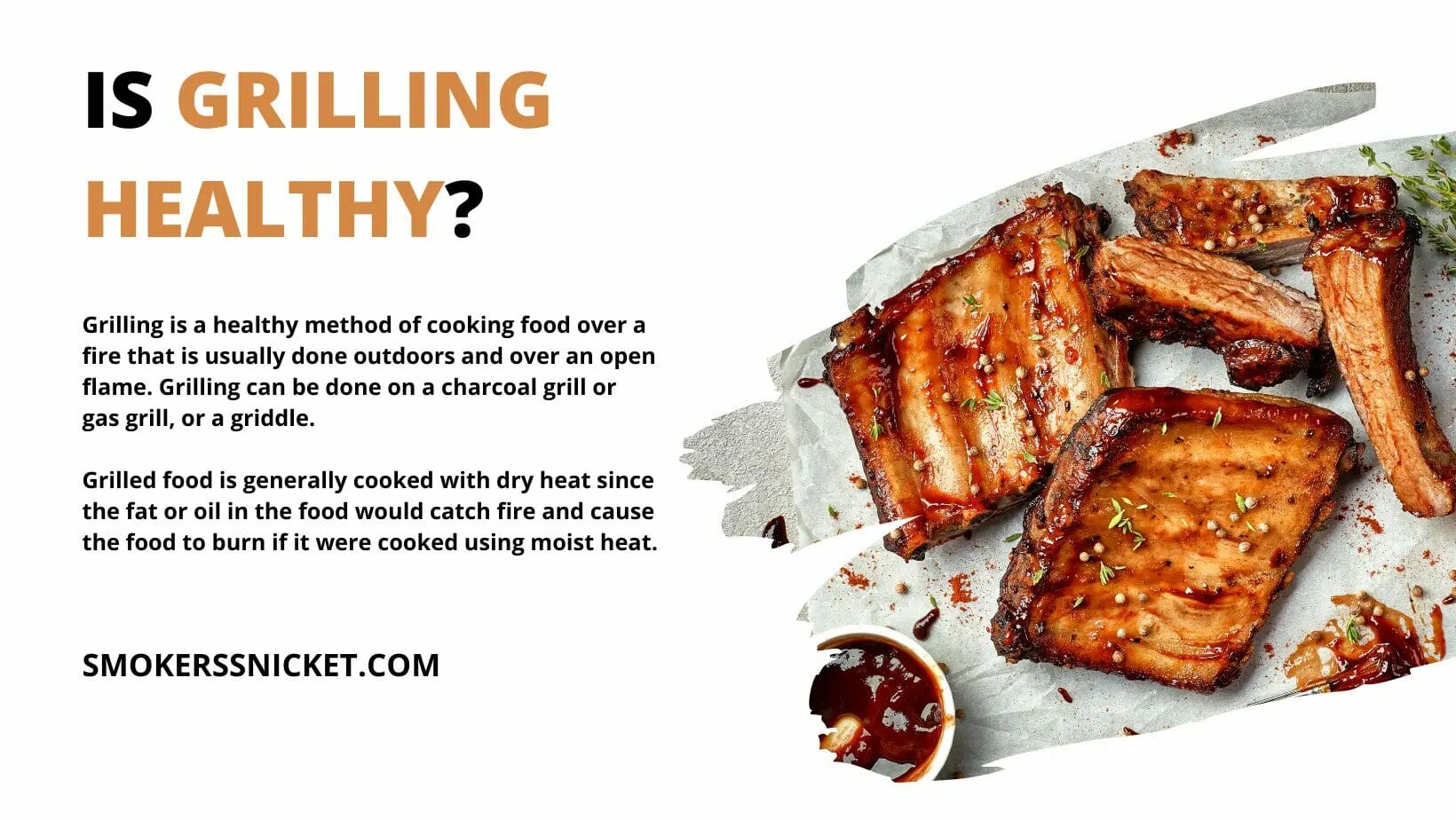 Grilling is a healthy method of cooking food over a fire that is usually done outdoors and over an open flame. Grilling can be done on a charcoal grill or gas grill, or a griddle. Grilled food is generally cooked with dry heat since the fat or oil in the food would catch fire and cause the food to burn if it were cooked using moist heat.

It’s summertime and everybody loves grilling. This hot cooking method is enjoyed by many and has been the primary way of cooking for centuries. However, a recent study has shown that high temperature while grilling can lead to the formation of carcinogens in cooked meats. The study also showed that people who grilled a lot had higher rates of stomach and oral cancers.

So, the question arises: Is grilling healthy?

It’s no secret that grilling meat, poultry, and seafood can lead to the formation of dangerous heterocyclic amines (HCA) and polycyclic aromatic hydrocarbons (PAH). Both of these chemicals are carcinogenic and can have negative health effects such as increased cancer risk.

This article will discuss the health benefits and drawbacks discussing the advantages and disadvantages of grilling on the human body that can happen due to its use. This will include information about different health conditions and a discussion about how its harmful effects can be lessened.

Grilling is a task that many accomplished outdoorsmen do with relative ease. The benefits of firing up the grill include a fun activity that takes little effort, is incredibly social, and is a delicious way to enjoy quality time with family and friends. However, grilling can be unhealthy if you don’t take precautions. Just because you’re outside doesn’t mean you should be eating pounds of meat.

Every person should grill at least once a week because it’s healthy and it’s fun. Grilling is one of the best ways to cook your meals because it gives your food a nice smoky flavor. Compared to other cooking methods, grilling takes less time and you won’t need to use any oil. The fat from the meat that you’re grilling also helps evenly cook the meat.

Eating a variety of meat, especially red meat, has many nutritional benefits and helps you to have a balanced diet. It’s also an easy way to cook an evening meal.

There are many lean cuts of meat that make great weeknight meals over a campfire, including lamb tenderloin, strip steak, flank, and ribeye.

A little marinating can even help protect the meat from charring and reduce the number of compounds linked to cancer.

By marinating meats, you can help tenderize them and add flavor. Studies have shown that especially those with little or no sugar, can protect the meat from charring and reduce heterocyclic aromatic amine (HAA) formation — compounds that have been linked to cancer.

To avoid cancer, it’s a good idea to not eat meat cooked at high temperatures.

By monitoring your grill’s temperature while cooking and monitoring the doneness temperature of meat, poultry, or fish, you can reduce the formation of HCAs, which are carcinogenic compounds that come from burning fat.

DON’T FORGET TO MARINATE THE MEAT

Margination is the perfect solution to lessen health risks. In a new study, researchers found that acidic marinades helped reduce the number of AGEs produced during red meat cooking. The American Institute for Cancer Research recommends allowing an acidic marinade to sit on protein for 30 minutes before cooking.

MAKE SURE TO USE HERBS BEFORE A QUICK GRILL

A recent study found that herbs like rosemary, oregano, sage, or thyme lower HCA production when beef is cooked. The study says this is likely because herbs have antioxidant compounds that protect against harmful chemicals. The authors of the study recommend cooking with rosemary whenever possible, or at least adding it for flavor when cooking high-heat protein such as fish or meat kebabs.

Whenever you do cook meat, try to cut it into smaller pieces, and either cook it quickly over really high heat or cook it for just a few minutes over the grill and then finish cooking it to your desired temperature in the oven.

Processed meats are associated with an increased rate of cancer and heart disease, which is why it is safer to substitute red meat with white meats like chicken and fish when possible, as there will be fewer AGEs and carcinogens produced. Fresh produce contains antioxidants and phytochemicals which provide additional protection from the harmful compounds produced by cooking red meats.

Skip processed meats altogether, and decrease your meat portion by throwing extra vegetables on the grill instead. Uncooked vegetables are mostly protective against the formation of AGEs and HCAs and can provide additional protection from these compounds.

KEEP AN EYE ON FLAME AND SMOKE

When grilling, make sure that the initial flames settle before cooking or use a grill pan. PAHs are created when fat and juice drip from the food being cooked to create smoke. Trim excess fat from the food prior to grilling.

PROTECT YOUR MEAT FROM CHARRING

Food tastes better when cooked on the grill and is healthier too, especially when you use natural charcoal instead of lighter fluid. But the chemicals in a lighter fluid can get into your grilled food, including your dinner’s fats and juices, creating harmful compounds known as PAHs.

These compounds have been associated with increased cancer risk. Avoid carcinogens by choosing leaner proteins and trimming excess fat before cooking.

Grilling protein foods until well done may increase the time for toxic HCAs to form, but also increases browning on the outside and the risk of charring, both of which increase PAH production.

Let flames die down before adding meat to the grill, and consider one of the quicker cooking options given above.

If food becomes charred, cut off and discard that portion. A gas grill is easy to start, but charcoal adds a little extra flavor – just make sure it’s not also adding extra chemicals by using lighter fluid (this includes quick-start briquettes which are presoaked).

Grilling meat is easy and delicious, but there are some things you should know to minimize your exposure to cancer-causing chemicals. This includes moderation and following the right guidelines.

How often should you eat grilled food?

Answer: there’s no hard and fast rule to count the days of eating grilled food but stay moderate and enjoy weekly or fortnightly, depending upon your love for the BBQ.

Why is grilling healthy?

Answer: Grilling over high temperature eliminates fat from cooking meat. So, grilled meats are typically lower in calories than the same meat deep-fried or cooked with oil.

Why grilling is bad for you?

Answer: Chicken is low in calories and fat, and it is a great source of protein. People who get enough protein are more likely to maintain muscle mass and support a healthy metabolism. There are so many reasons why chicken can stay with you throughout your life!

For detailed guidelines, give a read to IS GRILLED CHICKEN HEALTHY?