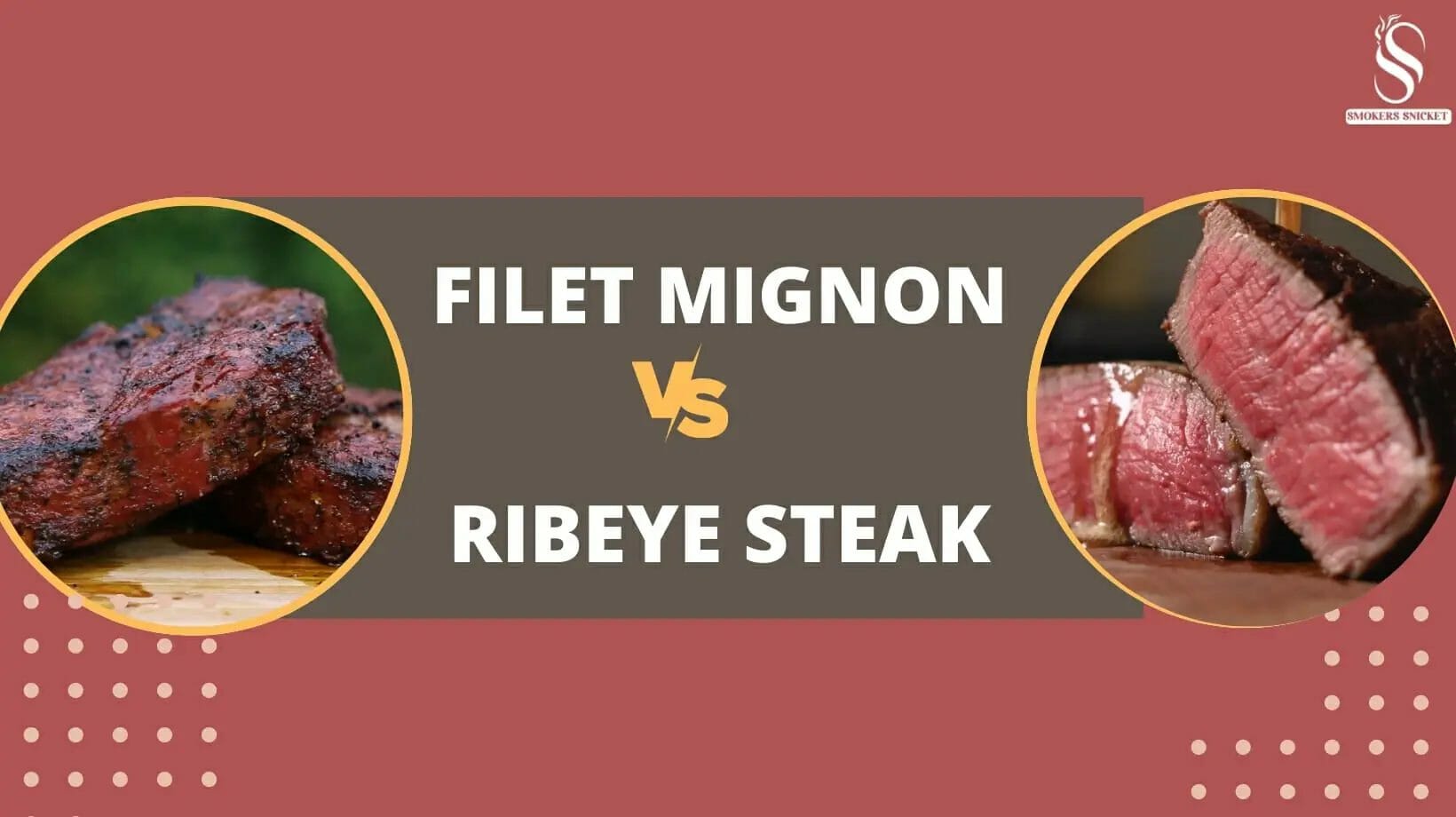 Both fillet mignon and ribeye steak are renowned for their tender, melt-in-your-mouth textures. Filet mignon has buttery smoothness, whereas ribeye has rich meaty flavor that steak lovers crave. Each cut comes from a distinct area of the cow, and the fat content and cooking techniques vary greatly.

Everyone who enjoys meat has an opinion about the best cut, which is typically strong, but the reality is that the best option for you will depend on a number of different factors.

The debate (Filet Mignon VS Ribeye ) between the two is as old as time itself. In this article, we’ll cover how ribeye differ from a fillet mignon, how to choose the one that’s best for you, and how to prepare them properly for delicious results.

The longissimus dorsi muscle produces ribeye steak. This is a long muscle that extends from the sixth to the twelfth rib from the shoulder blade to the hip bone. It is a tender cut because the cow doesn’t exercise the longissimus dorsi very much. It does, however, have a fair amount of “intramuscular fat” or marbling, which gives the meat a tonne of flavor and moisture.

The average size of a ribeye steak is between 11 and 16 square inches. You can order them either boneless or with the rib bone still embedded in the meat.

Bone-in rib eye steaks are sometimes referred to as “rib steaks.” The bone may be cut flush with the meat or protrude a few inches from it. The ability to insulate the meat and allow for slow cooking is the only benefit of bone-in meat. There are a lot of calories and fat in ribeye steak.

If you’re trying to lose weight, a 3.5-ounce steak might not be the best option because it has nearly 22 grams of fat and 269 calories per serving.

What is Filet Mignon?

The Centre of the tenderloin, which is found inside the ribcage, is where the highly regarded cut called fillet mignon is taken. The “psoas major” muscle is located close to the spine next to the ribs. These muscles are located on either side of the ribcage in each animal.

Filet mignon is a very tender cut that melts in the mouth because it is not a muscle that bears weight or is exercised by the animal.

Additionally, due to its low fat content, it is one of the leanest cuts of beef. Small fillet mignons are typically 1-2 inches thick and 2-3 inches across. Since they are cut from the psoas major muscle, which has a tube-like shape, they have a naturally round appearance.

Filet mignon will have a silver skin of fine, chewy connective tissue attached to it when it is first cut from the animal. Although it is frequently removed before sale, it must be removed before cooking. If you’re trying to cut back on your intake of fat, fillet mignon is a fantastic option.

A typical fillet mignon is incredibly lean and high in protein, with only 2.5 grams of saturated fat on average, which is significantly less than many other types of steak.

Difference Between Ribeye and Filet Mignon

Two of the most popular steak cuts are ribeye and fillet mignon. When comparing fillet mignon and ribeye, there are a few important differences that are given below:

The cooking methods of both cuts are given below:

How to Cook Filet Mignon

Filet mignon is prepared in a variety of ways by chefs and home cooks. The most popular cooking technique combines oven baking and searing. In addition, there are grilling, roasting, frying, baking, and broiling techniques. Use the sear-and-bake technique to prepare fillet mignon as follows:

How to Cook Ribeye Steak

Most ribeye steaks are cooked medium-rare, and a skillet is a popular cooking method for ribeye. Use this technique by following these guidelines:

Consider using a grill if you want to serve more than two steaks. You can cook ribeye steaks on both indoor and outdoor grills.

FAQs- About Filet Mignon or Ribeye

Which is Better, Filet Mignon or Ribeye?

This is a straightforward rule to remember. Steak lovers have long recognized ribeye as the pinnacle of steak flavor. This meat is a cut from the ribs of animals that are between the loin and the shoulders.

There isn’t just one steak cut that is the best, in actuality. Each has a purpose and fulfils a particular carving. A special treat, fillet mignon is frequently considered. The tenderloin or fillet mignon is by far the most tender meat on the steer, with a texture that is almost buttery.

It is the most expensive cut of meat available at the butcher because of how tender it is and how little meat there is on the animal. Due to its high price, many steak lovers think this particular cut is the best available, but because it has a very low fat content, it has a very bland flavor.

Does Filet Mignon have Fat?

Is Filet Mignon Good for You?

Yes. A variety of B vitamins, which assist your body in obtaining and utilizing energy from the foods you eat, are also present in fillet mignon. In addition to being high in iron, fillet mignon also contains the minerals magnesium, phosphorus, and potassium required for the production of enzymes and as decrease the risk of heart disease.

A crucial component of the proteins that carry oxygenated blood to all of your tissues and organs is iron and magnesium helps to lessen the frequency of migraine headaches.

Why We Love the Ribeye?

The most flavorful cut of steak, according to the majority of steak lovers, is the ribeye. The ribeye would probably come out on top nearly every time if you compared it to the T bone steak or the strip steak. This steak is derived from the animal’s ribs, which are located directly between the loin and shoulder.

The cuts have amazing fat marbling, which contributes to the juicy texture and rich flavors. The rib eye is one of those steaks that you can cook without doing anything to it other than seasoning it with some salt and pepper, if you like. The ribeye filet’s flavor speaks for itself.

Why We Love Filet Mignon?

Is fillet mignon the best cut of steak? Many steak lovers will affirmatively respond. Due to the fillet mignon’s reputation as one of the best steaks available, most people don’t give the higher price tag compared to other cuts much thought.

To help add some extra flavor, it is frequently wrapped in bacon or served with gravy or sauce. However, its texture is unrivalled. If tenderness is what you’re after, this steak, which is taken from the short loin of the animal, is probably the best steak cut available. It almost melts in your mouth, which is why people call it “melt-in-your-mouth” texture.

Both ribeye and fillet mignon are delectable, well-liked, and pricey options. The best steak for you will depend on your preferences, so there is no clear winner here. Ribeye steak is a top choice if you value meaty flavor because of its high fat content and simplicity of preparation.

On the other hand, fillet mignon might be your dream come true if you prefer lean, melt-in-your-mouth steak without any grease.